Students will be encouraged to make maximum use of the Institute Library. Students shall abide by its rules:

Any student convicted of an offence Under Section IV of Maharashtra Prohibition of Ragging Act 1999 shall be dismissed from the institute and such student shall not be admitted in any other educational institution for a period of five years from the date of order of such dismissal.

The decision of the Head of the Educational Institution that the student has indulged in ragging shall be final. 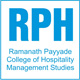